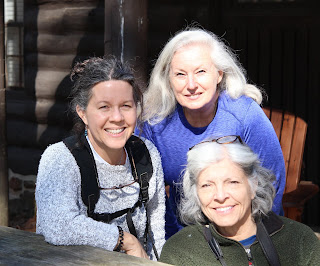 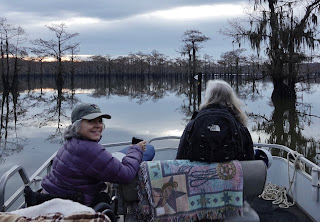 Greetings March birders! Travis Audubon has its annual Birdathon each April. This year Terry Banks and Celeste Treadway and I decided to lead a Birdathon trip to Caddo Lake State Park in East Texas on the Louisiana border. 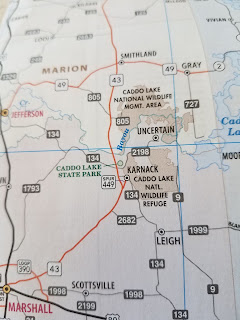 For those of you unfamiliar with Caddo Lake, it is a 25,400-acre lake, one of only a handful of natural lakes in Texas. Considered an East Texas Treasure, it is one of the largest Bald Cypress forests in the country. The trees, draped with Spanish moss towering over the maze of bayous, sloughs, and ponds of Caddo Lake, create a unique birding experience.

Caddo Lake State Park consists of 8,253 acres west of the lake itself, in Harrison County, near Karnack, Texas.

To prepare for our Birdathon, we needed to scout the area. Oh darn! So, in early March the three of us drove approximately 5 1/2 hours east from Austin. We stopped at the Neches River National Wildlife Management Area, and found it a little bleak. We think it may be better in April when the trees have leafed out and migration is on.

We arrived at our CCC cabins, unpacked, made beds, stocked refrigerators, set up the kitchen, and headed to the boat ramp just minutes away to bird as the sun was setting. 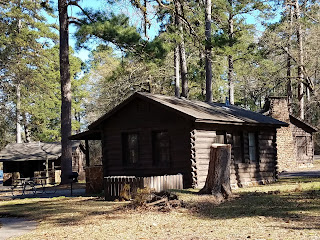 The lake is astonishingly beautiful. I was able to park in a van handicapped space and wheel easily around the boat ramp area and onto piers. We heard and saw Pine Warblers everywhere as well as White-breasted Nuthatches, Northern Flickers, Pileated and Hairy Woodpeckers. Just lovely. 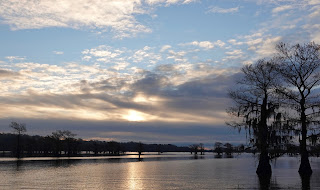 That night we gathered around the picnic table outside cabin 3, an ADA-cabin, which I found to be very accessible. We celebrated our arrival with wine, olives, crackers, cheese, salami, nuts, grapes, apples and other delicious odds and ends. We made a note to bring electric lanterns so we could stay outside longer at night for the April trip.

The next morning was stormy and wet, lightning and thunder, the whole kaboodle! The CCC cabins seemed the best place to be! Later that morning we met with Vanessa Neace, a wildlife biologist with 15 years experience with the Caddo Lake National Wildlife Refuge and Management Area. She showed us the ropes! We explored the Refuge and identified 6 spots to put on our Birdathon itenerary in April. We picnicked in the car, then headed to the National Wildlife Management Area, (hereafter called "double u may") which we determined to be a little too rough for this crowd.

After a short nap, we drove to the cute little town of Jefferson, 20 minutes away from the State Park to eat. We made it an early night because we knew we'd be getting up super early for the sunrise boat tour.

The next morning we met Rich McFarland of Caddo Lake Bayou Tours at 6:15 in the morning at the Shady Glade Marina, just 8 minutes from our cabins. It was fairly easy to get the wheelchair in the boat with a quick two-person lift. I would add here that persons with wheelchairs should call Rich to find out the boat's door width. My chair is only 22" wide, so this may be an issue. 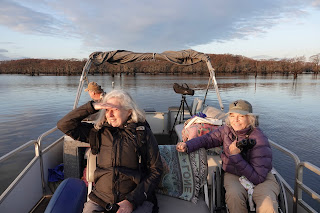 Our very first bird was the Barred Owl staring down at us from a Cypress tree overlooking the boat launch.

The next 3 hours were just lovely. We watched the sun rise over the lake through moss-laden Cypress trees as long lines of Cormorants flew in from roosts to join perhaps a total of 2000 others on the sun-glinted water. There are several collective nouns for Cormorants, my favorites of which are (is?) a "gulp," a "sunnery," a "swim." Perhaps your choice has to do with the collective's activity? 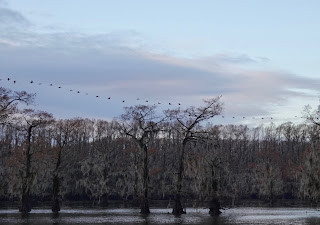 A particular highlight was what is known as the Government Ditch, built in the mid-1800s to allow the steamboats to come through the trees going to Jefferson from New Orleans. The boats took 5 days to get from New Orleans to Jefferson, which was the second largest port in Texas only behind Galveston during those years.

In the Government Ditch we saw a wonderful "kingdom,"
"castle," "court," "princedom," or "dynasty" of Golden-crowned Kinglets. We also enjoyed a "ubiquity" of juncos among others. We were surrounded by tall Cypress with birds flying all around us, up and down, overhead from one side of the channel to the other. Really fun. 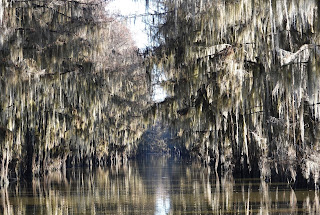 After the boat tour, we grabbed a late country breakfast at the nearby Country Store. We headed for the National Wildlife Refuge in order to be sure we knew what we were doing come April.

We then headed back to Jefferson to scout the Jefferson Heritage Nature Trail. Finding it fairly accessible, we had a great time, seeing 20 birds in less than an hour, including the Brown Thrasher and Yellow-bellied Sapsucker. By fairly accessible, I mean some of the slopes were too steep and the surface somewhat sand-like, requiring some assistance. We added the Trail to the itenerary and high-tailed it back to the Refuge to meet Terry and the American Woodcock around sunset.

We walked around what is called the Parade Grounds in front of the CLNWR where we were told the AMWO was vocalizing and displaying.  While we waited for his appearance, the Sedge Wren vocalized and gave us the best views we had ever seen. 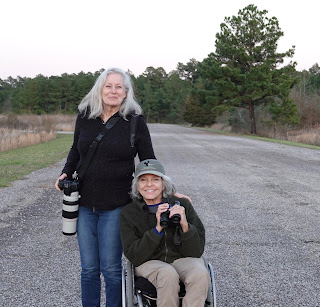 The AMWO started his loud, nasal "peent-ing" noises, which varied in number from 10 to 15 to 30 prior to his incredible rocketlike launch into the darkening sky. The "twittering sounds of air rushing through his wingtips" is otherworldly. His silhouette looked much like a very large bumblebee zooming off into space. Really incredible stuff! We began with Barred Owl and ended with American Woodcock. Not a bad day!

The next morning we relaxed around the cabins, drank coffee, and watched Pileated and Downy Woodpeckers, Brown-headed and White-breasted Nuthatches, Pine Warblers  and others cavort around their piney canopies. We packed ourselves up and planned a couple birding stops as we headed for home.

First stop was Buckhorn Creek Park at Lake o' the Pines, a very nice park with great roads from which to bird. Best bird here was Common Loon and there were 5 of them! The plural of Loon, btw is Loons. We had lots of very good looks at this bird.

Next stop was Davey Dogwood Park in Palestine. We enjoyed this very walkable park with great trees and trails. I did not explore the accessibility of this park, but I think it may have possibilities. I need to further assess. 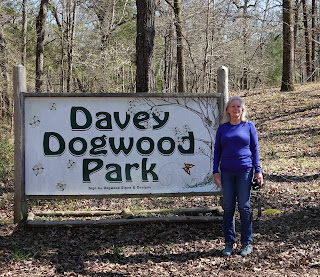 Finally as we edged closer to Austin, Celeste called in a to-go order from a great BBQ joint in Taylor. Some crazy Friday night traffic on one-lane roads backed us up on the way. We barely made it to the BBQ joint with 5 minutes to closing time!

We said our good-byes and headed home, not knowing (or not wanting to know) what lay in store for us in the coming weeks and months ahead because of Covid19.

We had to postpone our Caddo Lake trip until the first week in November, when the thousands of Bald Cypress trees will be brilliant with fall color. We three have done our homework and are ready to lead Travis Audubon birders when we finally get to go! 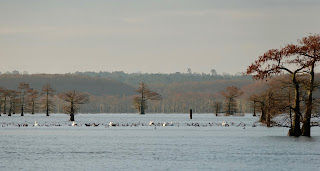 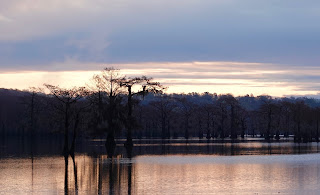 Big thank you's to Celeste Treadway and Terry Banks for their photos.