March 01, 2019
Two good birding buddies joined me this cold, misty morning at Lake Creek Trail. Lots and lots of wonderful yakking along the way, each of us encouraging the other to keep moving cause it was cold! Shirley threatened to go on ahead of us because Terry and I would get stuck on a skulker, but she never did.

Terry, with her amazing ears, kept calling out one species after another based only on snippets of vocalizations! Shirley and I would look at each other in wonder. I said, "What is it?," and before she could reply, she called out another. "What was that one?" I turned to her, but she was headed down a small slope, her eyes to the trees and her binoculars at the ready, continuing to name the birds she was hearing out loud though neither Shirley nor I could hear her. Seconds later, she was back with orange-crowned warbler, white-throated sparrow, American pippit, Lincoln sparrow, and others. She said, "I just have a brain for bird calls." Boy, does she!

We studied the "mew" and "way" calls of spotted towhee and hermit thrush, differentiating them aloud. We studied sparrows, the stripey savannah, the long tail of the song. Terry played the song sparrow's song "to help teach the young male how to do it!" What? Shirley said, "the school of Terry's birdsong, for professional birds!" We cracked up.

I worked on my screech owl calls, collecting a ball of spit on my tongue and whistling through it. Terry suggested I purse my lips a little more to get a more accurate sound. Need to keep practicing.

All in all, 35 birds, not a bad haul considering the weather! Best bird, pippits? 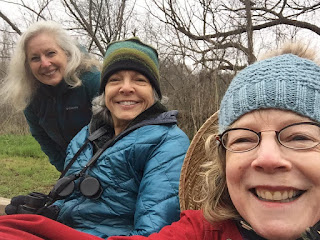