May 15, 2018
My Birdathon was so great! I didn't get a wink of sleep the night before due to excitement...not worry. I got out of bed at 4:30, realized the park didn't open till 7:30 and tried to get another hour of sleep. At 6:00, I packed my cooler, grabbed my coffee, my phone, my Travis Audubon cap, and my binoculars and went out the door. The morning was beautiful. I began at Berry Springs at 7:30 a.m. with Red-tailed hawk. Throughout the morning, I fielded calls and texts from friends, family, and two reporters with National Audubon who were going to meet me later on the trail. I picked up 35 birds at Berry Springs and headed for Windermere in Pflugerville where I picked up four more bird species. I would have liked to stay longer at Windermere, but Mike Fernandez, the National Audubon photojournalist texted to say his plane was in and where now? I suggested he uber to Richard Moya, and I would be there probably 10 minutes after he arrived. I headed for Richard Moya.That completely unplanned logistic worked perfectly as the airport was only 7 minutes away from that park. Mike started filming the moment the ramp came out of the van. I grabbed my cooler out of the back and wheeled to the picnic table. We ate lunch and began birding. I did more talking than birding, but at the end of the walk, an indigo bunting flew into the big pecan tree in front of me. I added two new birds to my species list. I had coordinated another meet up with Tom, another National Audubon reporter, at my fourth park, Lake Creek Trail, with Mike and his camera in tow. We picked up 9 new bird species here. Tom departed, and between parks number four and five, Mike wanted to film my native garden. Apparently, it is the new focus of Nat'l Audubon as a way to protect birds at the local level. He went crazy in my yard, filmed every native plant as I narrated. Then about 7:15p.m., we went to Beverly Sheffield Northwest Park, and it was so perfect! I'd told him a story about the green heron there, and he SHOWED up as if cued. And then as the last light was fading at 8:00, a common nighthawk called and a minute later wheeled in the sky above us. The whole day was like that. First bird 7:30 am. I birded 12 hours, got 52 birds, and wheeled 10 miles in 5 accessible parks. I am very happy. Thanks for your support! 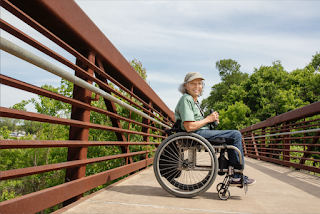 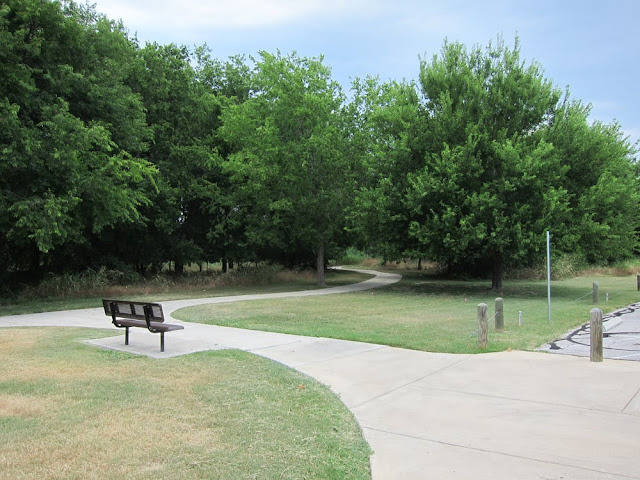 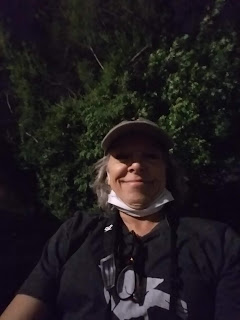 5:40 a.m. with mask ready! 7:15 a.m. with mask ready! 11:00 a.m. with mask ready! 3:00 p.m. with no mask. Oops! Hi, all. I sure hope you have been able to get outside and enjoy migration this spring. In Austin the temps are already heading into the 90's with humidity to boot! I wanted to share with you a fun event in which I participated last Sunday, May 24. Travis Audubon postponed our spring Birdathon to the fall. In an attempt to revive the members' spirits, we decided to have an impromptu Birding Brawl, whereby 4 prominent board members, past or present each conducted their own Big Day...ALONE! The event was held on Sunday, May 24, over 24 hours within the Austin area Checklist. We each had fundraising pages and in total we earned over $7,000! Shelia Hargis, past president of Travis Audubon, won with 91 birds! We had fun, and though I did not win, I had a great time. See my narrative below. At 5:40a.m., I sat in the beautiful dark at Riata Pond for 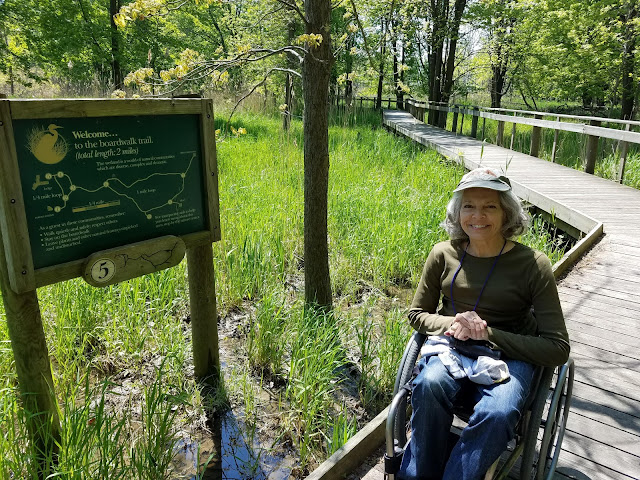 Hi! My name is Virginia Rose. I am a paraplegic and have used a manual wheelchair for 45 years. I have been an avid birdwatcher for about 15 years now. I joined Travis Audubon , (TAS), and co-led the beginning bird walks once a month for 7 years. I am now on the board of directors  for TAS. I have identified many wheelchair accessible parks in central Austin over the years and am interested in helping mobility-challenged folks get outside and experience nature. So many people with disabilities do not realize how much they can do outside! I started Birdability because I want to share the joy of birding with others. The hobby has enriched my life in so many ways. I have taken countless birding classes and learned so much. I have met wonderful people along the way who have welcomed me into the organization with open arms. I have gone on 100+ field trips to see beautiful parks and beautiful birds. Along the way I have become more confident in being outside on my own or with others. It